In the solar industry, the report records 24 transactions amounting to more than 5.5GW in gross capacity transacted. As compared to a very busy March with 15 transactions of more than 13.4GW, April was significantly slower regarding MW transacted in solar energy deal flows. As last month, the USA were in the leading place regarding total MW transacted with 8 transactions amounting to more than 1.52GW. The USA’s leading position was mainly due to Duke Energy Renewables selling a minority stake in a roughly 1.2GW portion of its renewable energy portfolio to the John Hancock Infrastructure Fund and John Hancock Life Insurance Company. Under the agreement, Duke sold a 49% stake in 37 operating wind, solar and battery storage assets, as well as 33% in a further 11 operating solar assets across the US. France followed the US with transactions amounting to around 1.6GW: EDF Renewables completed its acquisition of French solar developer LUXEL who has 1GW of assets either in operation, construction-ready or in development.The full capacity in comparison to the previous month went down by around 59%.

As for the wind industry, the report records 15 transactions amounting to almost 5.7GW in gross capacity transacted. After the very busy March with 24 transactions amounting to over 17GW, the positive trend changed in April for wind energy deal flows. However, the USA were again in the leading position regarding total MW transacted with 4 transactions of almost 2GW, mainly due to Xcel Energy finalizing its purchase of the two wind farms Blazing Star 2, Dakota Range 1 and two other projects in South Dakota which altogether provide around 700MW of energy to their customers. India was in the second place with 1 transaction of 874MW: state-run gas utility GAIL acquired Infrastructure Leasing and Financial Services’ wind energy portfolio of seven operational plants. Brazil took the third place regarding total MW transacted with 2 transactions of 835MW.  The total capacity in comparison to the previous month went down by approximately 66,5%. 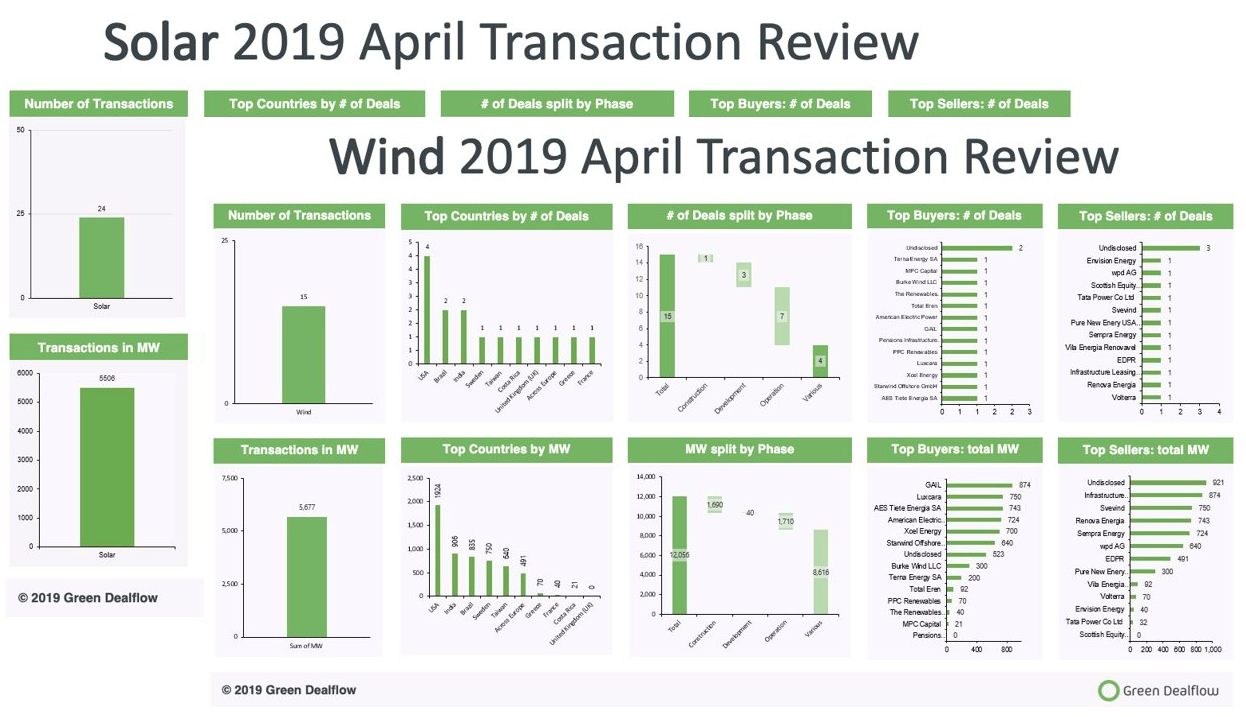