Different than last month, Spain was in the leading place regarding total MW transacted with transactions amounting to 3447MW. The leading position of Spain was due to Brookfield Renewable Partners’ transaction. The renewables arm of Canada's Brookfield Asset Management announced the acquisition of the 50% stake of the Spanish solar developer and operator X-Elio.

Brazil followed Spain with a single transaction of UK-based Lightsource BP, that acquired 1900MW of greenfield solar projects in Brazil from the Brazilian developer Enerlife.

In the wind industry, the report records a total of 21 transactions amounting to 5.5GW in gross capacity transacted. As compared to a quieter month of June with 3.6 GW in 18 transactions, July was 25% more active regarding MW transacted in wind energy deal flow.

USA was in the leading place regarding total MW transacted with transactions amounting to 2.5GW. The leading position of the USA was due to American Electric Power Company acquiring three under-construction wind farms in Oklahoma with a total sum of 1485MW.

India was in second place with one transaction of 784MW, in which IL&FS received the approval to sell the 51% stake of seven operating farms portfolio to the financial services conglomerate Orix Corp. 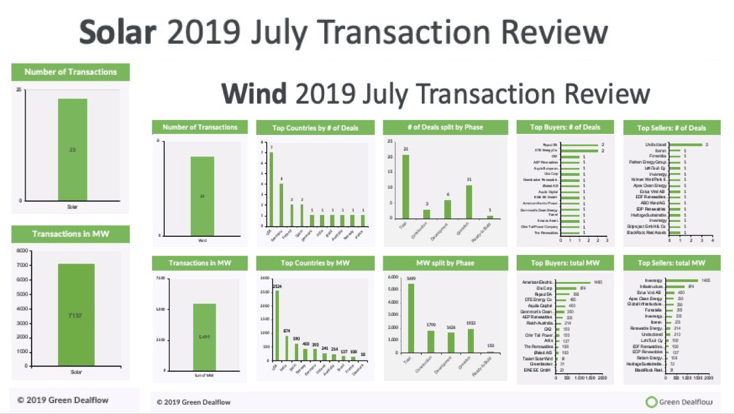