Equally to the last months, the US was in the leading place regarding total MW transacted with 10 transactions amounting more than 5.3GW. The leading position of the US was mainly due to the Spanish company Acciona purchasing 3GW of solar projects and 1GW of solar + storage from developer Tenaska. The deal spanned 20 projects, 7 states and 2 power markets. Brazil followed the US taking the second place mainly due to Nebras Power completing the acquisition of majority stake in 4 major Brazilian solar projects.

In the wind industry, the report records a total of 21 transactions amounting to 4.7GW in gross capacity transacted. As compared to a more modest month of September with 3.5 GW in 25 transactions, October represents a change in activity and becomes the most active month of this year, so far.

This month, Poland outpaced the US regarding total MW transacted with one transaction of 1.5GW in which RWE Renewables became the new owner of 4 offshore wind projects in the Baltic Sea. The US was in second place mainly due to Tri Global Energy reaching an agreement to sell the 360MW Canyon Wind project to Silverpeak, an alternative investment firm focused on real estate, energy and credit. 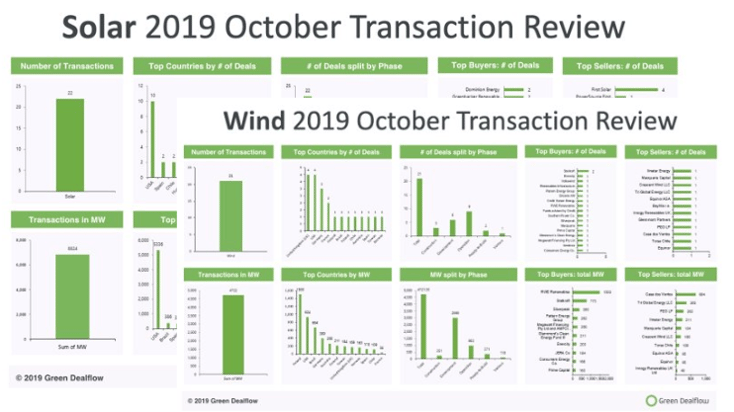